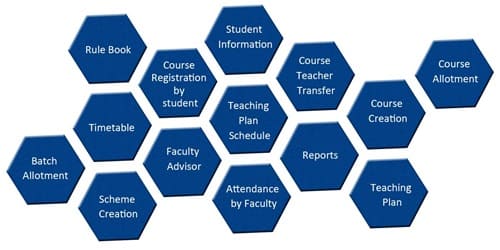 St. Josephs College of Commerce (Autonomous) had proposed the introduction of Choice Based Credit System (CBCS) from the academic year 2015-2016. The CBCS system has been introduced for both the UG and PG programs. The rationale behind the implementation of CBCS is that it provides an interdisciplinary approach with greater flexibility and mobility while giving students a wider choice of subjects.

The CBCS System seeks to transform students from being passive listeners to active participants of the knowledge and imbibing process. In addition to this, it provides them with the option of credit transfer across the country and the globe. A comprehensive methodology was structured on the basis of content preparation, teacher training, classroom re-vamp and capacity building.

A well-planned evaluation system has been developed which comprises of two component – Continuous Internal Assessment (CIA) and End-Semester Examination (ESE) with the weightage of 30% and 70% respectively. The end-semester examination is for 70 marks and written for a duration of 3 hours. The CIA component also includes a Mid-Term Test and can also include any other exercise as per the teacher’s discretion, such as an online test, quiz, assignment or presentation, etc.

The minimum SGPA to qualify for the B.com degree is 4.00 and a pass in all subjects. This would require a 40% aggregate in both components. The papers are initially marked in a conventional way for 100 marks, following which they are converted to grade points in accordance with a pre-determined grading system. Further, credits are assigned to subjects based on the broad categories they fall under, namely Languages, Major Core, Major Optional, Allied required and Allied Optional.

The Semester Grade Point Average (SGPA) and Cumulative Grade Point Average (CGPA) are calculated after considering credits, grade points and subjects undergone by means of an established method. Credits are also assigned for mandatory courses like Indian Constitution, Environmental Studies and Human Resource Development. Similarly an internship needs to be completed. The Credits so earned are converted to grades.

Certificate Programs can also be taken up and the credits so earned are similarly converted. Extension and extra-curricular activities, which may be mandatory or optional, is also credited to the CGPA. Similar credits can also be earned by participating in Sports, subject to similar guidelines.