The above selected candidates were enrolled by Goldman Sachs for their summer internship programme.
• Accenture India has hired 8 of our second-year students as interns. 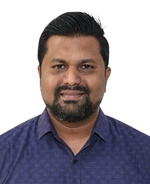