Dr. T. H. Lavakumar, a progressive writer grooming himself as a playwright and poet and hailing from Doddaballapura is working as a director in both Kannada and English theatre. Along with a degree from Neenasam he has done his Masters in Kannada, English and Psychology. He is currently working as an Assistant Professor at St. Joseph’s College of Commerce (Autonomous), Bangalore and is pursuing his Doctoral degree from Bangalore University on the topic “Theatre in Education: Problems and Possibilities”. He is a multi-talented person engaged in organization, education and movements along with transforming theatre into a lively and creative field.

Jategiruvanu Chandira, Uriya Uyyale, Tukrana Kanasu, Henada Mane, Kaniveya Neralalli, Yashodhare Malagiralilla, Kattale Dari Doora are some of the plays among the 22 plays he has directed in Kannada. In English he has directed 9 plays, which include Shoemaker’s Prodigious Wife, The Gash, Mother of 1084, Bobby’s Story, Death of an Actress, Our Town, Woyzeck. In Hindi he has directed Tagore’s Dhak Ghar, Kabuliwala and, Riti Ki Kahani. He has published more than 16 articles on the subject of theatre in newspapers like Hosatu and Agni. He has presented papers in more than 35 state, national and international seminars and conferences. Taking note of his writing the Karnataka Nataka Academy in 2011 granted him the prestigious annual fellowship to write a book on children’s theatre. He has also worked as Rural Coordinator for Karnataka Nataka Academy from 2006-2009 and in 2008 he had worked as the coordinator for ‘Janapada Jatre’, Bangalore Rural.

He also as written 2 Children’s Plays Male Haniya Jadu Hididu and Bedaru Bombe , translated Henada Mane and Baby Kathe written two major plays Kichillada Bege - A play to be published by Kannada and Culture Department of Karnataka on the topic of women and ‘Kindi’, a play on Kanakadasa - It has chosen by the Kanaka Adhyayana Peeta for publishing. He also has written and directed More than 47 street plays 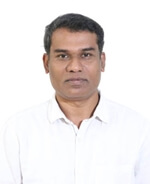