Article published by Southern Economist- vol 50, No 14 November 15,2011.- An empirical investigation into the relationship between the U.S economy and the economies of selected Countries

Article entitled Growth and Changing Directions of Indian Textile Exports in aftermath of the WTO, published in the International Research Journal of Social Science and management ISSN2251-1571

Article entitled – Higher Education System in India: An analysis of the GER, Published in the Compendium (with ISBN code) of National Seminar Conducted by St Josephs College of Commerce, Bangalore, September 2012

Article entitled Dynamics of Field Crops in Karnataka: Implications of Climate Change, (1970-71 to 2010-15), published in research Journal of social science and Management ISSN 2251 1571.

Women and the working environment”- A study of the organized sector in Bangalore District. paper published in the National Conference, Holy Cross College , Trichy Trends in Cotton Textile exports-the after math of the Phase out in 2008(in Print)

Presented a paper on Direction of India’s International Trade in the University of Jaffna, Srilanka in March 2014

She has more than twenty years of teaching experience in St Josephs Commerce College, Bangaloreapart from being a visiting faculty to some of the reputed B schools in Bangalore. An avid researcher in the field of social science, she completed her graduation from Mount Carmel College , Bangalore, and post-graduation in Economics from Bangalore University. She completed her Doctorate Studies on women studies related once again to Economics.

Though initially started off teaching Economics to undergraduate students, over the years she has also ventured to teaching many theory subjects in the field of Commerce and Management at the graduate and post graduate level. Research work being her passion at the professional level, she has published many articles in National and International Journals. She also penned a Book titled Hotel Economics published by New Age publications. India, specifically for Hotel Management students. Apart from teaching she was working as Editor in the Instuition’s Research Centre for a period of three years. During the period, she had conducted three National Seminars sponsored by the UGC, New Delhi. She was also the editor for Bi-annual Research journal and Bi annual student Journal, besides three seminar compendiums released with ISBN no.

She has Successfully completed six research projects in diverse areas of Economics, Social work, slum studies, migration studies besides successfully completing a research project on Climate change in the southern region using secondary of over sixty years. All these projects were sponsored by the UGC, Planning Commission and ICSSR, New Delhi, all reputed Organisations of the Govt of India. Three projects were sponsored by the Institution in order to bring interventions through projects results. 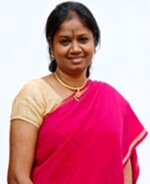